We've all seen the popular fantasy consoles like PICO-8 and its lesser-known cousin, TIC-80. These VM-like programs typically run small scripts that manipulate a display and a rudimentary sound system to create tiny games with a very retro-ish feel, in imitation of real consoles like the SNES. To enhance this retro vibe, these consoles have some severe limitations: a "token limit" (i.e., a limit on the number of lexical tokens the script can contain) a maximum of 16 colors, fixed-size pixel display, 4-channel audio, a limited number of sprites, etc. 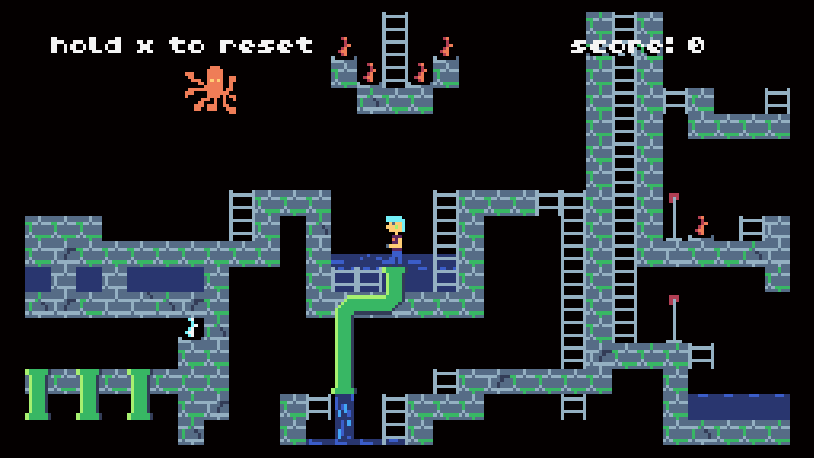 Which brings us to cel7. It's not really a fantasy console; its creator describes it as a miniature framework for creating small games. This is partly true, as cel7 has no "hard" limits on display or code size (the display can be resized to whatever the script writer wishes), unlike a true fantasy console. But, it still does have some interesting limits -- the display is grid-based (i.e., not pixel-based), with a sprite size of 7x7 1 ; there are only 96 available "slots" for user-defined sprites 2 , and those sprites may only be two colors at once (out of an available 16 colors). Plus, the scripting is not done in Lua, Javascript, or other garden-variety scripting languages, but with fe, the cel7 author's tiny lisp language.

These unconventional but relatively severe restrictions may initially make cel7 seem like a toy, useless for writing "serious" games, but in my (brief) period of writing small programs for fun with it, I found these limitations rather enjoyable. But then again, I'm the one who enjoys writing games for the terminal...

(demos/snake.fe by rxi for cel7)

Here's a quick dissection of a hello world demo (a slightly more complex version is bundled with cel7).

Firstly, we have some configuration values: the (= title ...), (= scale ...), etc statements. When the script is run, cel7 reads these values and sets the window's scale, size, and title to these values.

Then, we have the step() function. Like other orthodox fantasy consoles, cel7 also will try to run certain callbacks within the script: init() when cel7 starts, keydown() when a key is pressed, and step() about 30 times a second (these callbacks aren't required to be there; if they aren't present, no action is taken).

In this case, the step() function does a few things:

ⓘ
cel7 does have "memory" like PICO-8, i.e., a byte array that's manipulated to change the screen, sprites, and other settings. This gives it a more fantasy-console feel despite being a "framework". The memory layout is as follows (addresses are in hexadecimal):

Unfortunately, cel7 seems to be abandoned. No updates have been posted for some time, documentation is very sparse (there's no docs on the sprite or color format), and worst of all, there's no source code -- just binaries for Windows and x86_64 Linux. I had to borrow a friend's Windows machine just to try it out, as the only computer I have access to at present is an ARM machine. 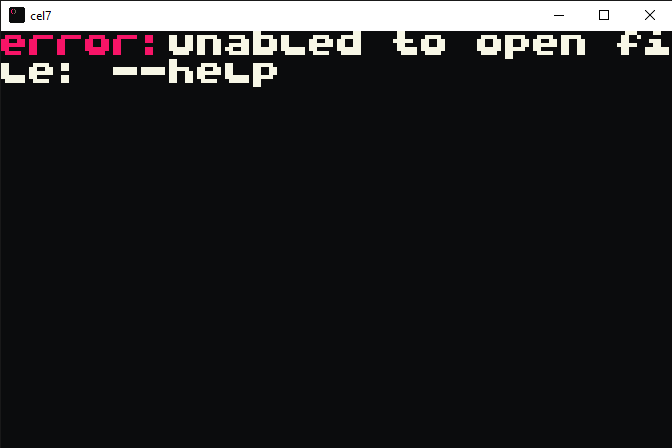 This project intrigued me too much to let it go, though. So, I started an open source reimplementation termed 'cel7ce' (i.e., cel7 community edition) on Shithub. It does everything the organic cel7 does, and some more (it has support for Janet, another obscure minimalistic language) 3 . The goal is to create a more polished, documented version of cel7 that's (almost 4 ) completely backwards-compatible with scripts written for the original.

Reverse-engineering cel7's undocumented implementation details turned out to be a lot of fun. Since the default cel7 palette was unspecified, I had to objdump the binary and crawl through the data section looking for specific hex values I knew were existing colors (extracted from cel7 screenshots), hoping to find the other colors next to it (I did). I thought I'd have to do something similar for the sprites and fonts, but happily one of the demos had some code writing a custom sprite to memory, from which I was able to infer the sprite format after an hour or so of tearing out my hair.

I had also intended to write a small roguelike in Janet with cel7ce for 2021's Autumn Lisp Jam, but just before the jam started I decided to go on a sabbatical from most of my hobby projects and all internet forums for a few months. Of course this slowed my cel7ce work as well; but hopefully, if I'm still around next year, I'll be able to release v1. I'm almost through with the v1 release -- it just needs a bit more testing and a quite a bit more documentation.